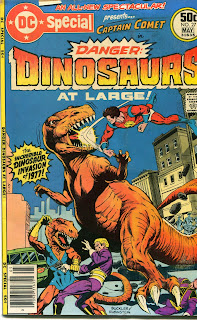 Because dinosaurs are the coolest things ever--and because there was a time when comic book writers & editors knew this--then tossing in a dinosaur-themed story just for the heck of it was considered a good thing.

And the world is a richer place for this. The 1970s series DC Special usually featured reprints. But issue #27 (April-May 1977) was an original story written by Bob Rozakis and drawn by Rich Buckler. It was an opportunity to showcase Captain Comet--a character who had appeared in Strange Adventures during the 1950s. Having recently been re-introduced to DC's continuity (turned out he had been exploring space for 20 years), I assume that the editors were looking for opportunities to show him off to contemporary comic book readers.

The story also effectively inserts another relatively obscure character into the mix--Tommy Tomorrow, a space explorer whose adventures had been chronicled in Real Facts Comics, Action Comics and World's Finest Comics from the late 1940s until the early 1960s. That's was a pretty respectable run, though he was always a back-up feature and never achieved the recognition that superheroes garnered.

It is fun to see both these guys in action again, but the dinosaurs steal the show. (As dinosaurs are wont to do.)

Two important plot threads are intertwined as the story jumps back and forth from 1977 to 100,000,000 BC (where Tommy Tomorrow and his space ship & crew are stranded after some time travel shenanigans). It's very well-constructed--the shifts from one time & location to another are smooth and we never have any trouble understanding what's going on.

Tommy was zapped back into the past by a comet that emits temporal radiation. A fragment of the comet lands on prehistoric Earth, where it mutates a T-rex into an intelligent being and declares the fragment to be his god. Tommy and his men must battle both this guy ("Tyrano Rex") and the various dinosaurs he controls to snatch up the fragment and zip through the time window it was creating, bringing them to 1977. 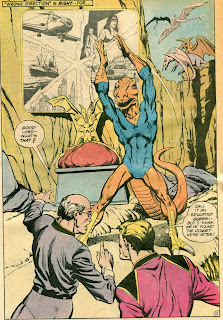 Simultaneously (well, sort of), dinosaurs are pouring through time windows created by the comet fragment and invading various cities. In the JLA satellite, Captain Comet is visiting and hanging out with Hawkman. But when the dinoaurs pop up and the JLA responds, Hawkman leaves Comet on monitor duty and goes off to fight dinosaurs himself. I wonder if JLA regulations allow that. 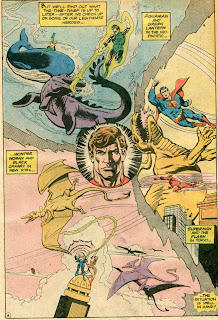 It works out okay, though. Comet sees a hero he doesn't recognize fighting dinosaurs in Sheboygan. (For no particular reason at all, I love that the location is Sheboygan rather than one of DC's fictional locations.) He heads down to help.

But remember that Comet has been in deep space for years. The "hero" is actually the villain Chronos, who caused this whole mess. He had tried to snatch the comet from the future to make use of its time travel capabilities, but had accidentally sent it (and Tommy Tomorrow) back to the Age of Dinosaurs. 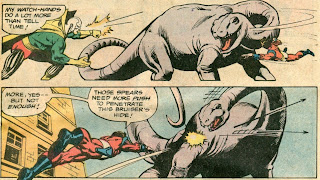 Comet's powers include telepathy, so he immediately realizes Chronos is a bad guy. But before he can deal with that, he has to take care of those pesky dinosaurs. He does so fairly quickly, in one instance employing what is now my favorite anti-dinosaur tactic: Use the tail of one stegasaurus as a club to knock out a second stegosaurus. 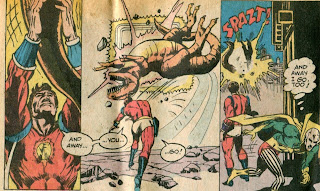 Tommy's ship pops out of the time window. In the ensuing scuffle, the comet fragment Tommy
brought back with him is destroyed; Tyrano Rex (who stowed away on Tommy's ship) reverts into a regular T-Rex and is dispatched; and Chronos is captured.

So pretty much a normal day in the DC Universe.

Tommy and his crew, by the way, are given a lift back to the future by Superman, tying up that plot thread neatly.

The main purpose of the story is obviously to showcase Captain Comet for current readers. And that's okay, because the story Rozakis created is full of fun.

And full of dinosaurs, which is pretty much the same thing.