Well, It IS a Good Day for a Hanging

I was reminded not long ago about a movie I saw on TV as a kid. It starred Fred MacMurray, who was a store clerk in a Western town. During a bank robbery, he gets lucky and shoots one of the fleeing outlaws. Then he gets unlucky when it turns out the guy he killed was the younger brother of the leader of the outlaw gang. So now poor Fred is marked for revenge.

I wanted to watch the movie again. Heck, I thought I was caught up with re-watching obscure films I'd seen as a kid--sadly, this isn't the case. But this time, I was out of luck. It wasn't hard to identify the movie--it was At Gunpoint (1955). It is not, though, available on DVD or via streaming. Rats. Some day, evil gods of movies-not-available-on-home-video! Some day soon I'll beat you! 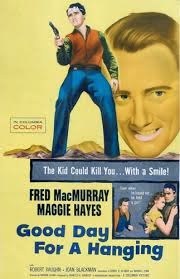 While researching this, I did learn of another MacMurray Western from the same decade, which I immediately put on my Netflix list.

Good Day for a Hanging was made in 1959. Once again, MacMurray (Ben Cutler) lends a hand when a bank is robbed, though this time he's an ex-lawman rather than a meek clerk. He kills one of the outlaws and joins in the posse to chase the others.

During that chase, the town marshal is killed by Eddie Campbell (Robert Vaughn), the youngest outlaw in the gang. Ben Cutler then wounds and captures Eddie. Two surviving outlaws escape.

It seems like the case against Eddie is clear-cut, but none of the other posse members can definitely identify him as the killer. Ben is certain, though, and his testimony is enough for a death sentence and a scheduled hanging. 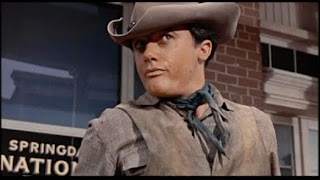 The trouble is that Ben's daughter is in love with Eddie. Also, Eddie is good at garnering sympathy from others--his act involves breaking down in tears during the trial as he proclaims his innocence and begs for mercy. It's a good act, too. If we hadn't been clearly shown that he was indeed the killer, we might very well doubt it ourselves. 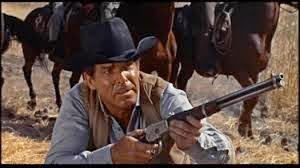 So Ben--who had been appointed the new marshal--must now deal with a town that increasingly thinks Eddie might be innocent and that Ben wants to hang him for personal reasons.

MacMurray and Vaughn are very good in their roles. The script is intelligent, depending on drama and character interaction rather than straight action to build suspense. The story is very well-constructed and told effectively.

This last point isn't a surprise. Good Day for a Hanging was directed by B-movie stalwart Nathan Juran, who knew how to make good films. Whether he was directing a Western such as this one or a fantasy or science fiction film such as 20 Million Miles to Earth, his stories always move along briskly and logically.

What's interesting about Juran is that he didn't think of himself as an artist, but as a technician doing a job. When once asked about his career as a director, he said "I approached the picture business as a business. I always did pictures for the money, and for the creative challenges. I wasn't a born director. I was just a technician who could transfer the script from the page to the stage and could get it shot on schedule and on budget. I never became caught up in the 'romance' of the movies."

Well, he may not have been caught up in the romance of movie-making, but by golly, Nathan Juran told good stories.

Email ThisBlogThis!Share to TwitterShare to FacebookShare to Pinterest
Labels: B-movies, Good Day for a Hanging, Westerns