Gotta Get to Jupiter? Take a Cab! 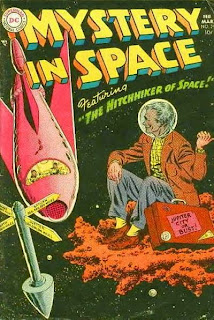 There are times when the 21st Century is very disappointing. I can live with the lack of personal jet-packs. I can deal with having no robot butler. I don't like waiting at the bus stop when its raining, but I won't bemoan the absence of weather control satellites.

But, by golly, we don't have any SPACE CABS! We can't jump into the back of a space cab, snap out "Mars, driver. And step on it!" and then get to the Red Planet after paying a quite-reasonable fare. We really can't do this. It's intolerable.

It's all Otto Binder's fault. It was he who created Space Cabbie in Mystery in Space #21 (August 1954). Because who else except Otto Binder could come up with such a goofy concept and make us wish it was real.

Space Cabbie returned in Mystery in Space #24, now written by France Herron, for what would be a 24 issue run--the only series character in what was otherwise an anthology book.

I have no idea what sort of profit margin a space cabbie has, but it can't be much. The story from MIS #24, titled "The Hitchhiker of Space," begins with the Cabbie on Earth. His cab has been stolen, but was recovered on Jupiter. All he has to do is get to Jupiter and show some I.D. Then he can get his cab back. 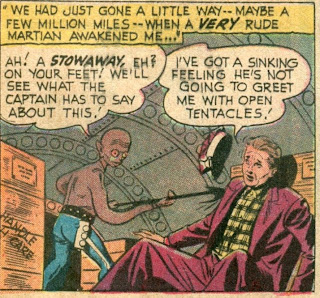 But he doesn't have a cent to his name. He tries stowing away on a rocket to Mars, getting him one step closer to Jupiter, but he's discovered and forced to work for his fare by doing the tedious job of meteor repair. 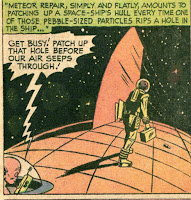 Upon reaching Mars, the Cabbie is shanghaied aboard a ship heading for Venus, which is exactly in the wrong direction from where he needs to go. Fortunately, he and some other prisoners manage to get free and overpower the crew.

They're picked up by a police cruiser, but that's heading for Venus as well. Rather than keep going the wrong way, the Cabbie waits on a small asteroid and tries to thumb a ride going in the right direction. 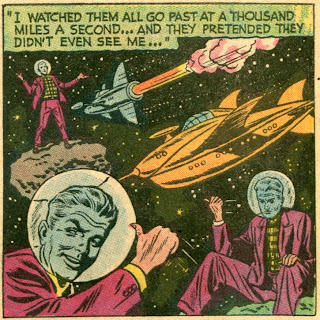 Gee whiz, space pilots in the 22nd Century are a bunch of big meanies. Some time passes before the Cabbie finally gets a ride. It's here his luck seems to change--the ship that picks him up is indeed heading for Jupiter.

He has finally made it. He's reached Jupiter and now all he has to do is show the cops his identification and he can get his cab back. The ordeal is over...

...if only he hadn't forgotten his wallet back on Earth. 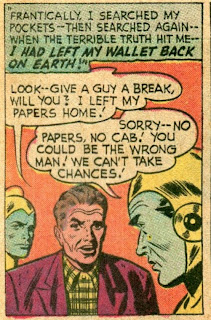