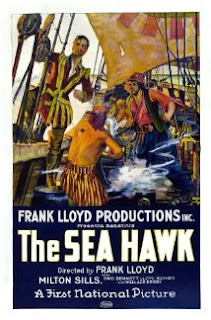 Rafael Sabatini's novels always depended on his ability to construct smoothly ornate sentences and cool dialogue. So, though silent film is an art form that is perfect for many types of film, it would superficially seem that Sabatini's novels would lose something vital in the translation to the screen. This would be especially true of a novel such as The Sea Hawk. As I wrote last week, it's a novel that depends largely on perfectly constructed conversations between the characters to generate excitement and suspense.

But a silent film depends on title cards, so dialogue has to be pared down to the essentials. So what happens when you produce a faithful version of The Sea Hawk in terms of story and character arcs, but have to leave out a lot of the awesome wordplay? Can it still be a great movie?

Astonishingly, the answer is "yes." Directer Frank Lloyd and screenwriter J.G. Hawks do a magnificent job turning the novel into a film. They are, of course, helped along by Milton Sills' effective portrayal of the film's protagonist. (Walter Anthony, who wrote the inter-titles, also deserves credit.) Sills is great in the title role; remember that acting in the silents meant walking a fine line between being expressive enough to make up for the lack of spoken dialogue AND being subtle enough to be believable. Sills strikes that balance nicely, helping ground the film in a world in which we can believe.

The dialogue is indeed boiled down the the essentials, but the story is kept remarkably intact. Sir Oliver still covers for his brother Lionel when Lionel kills Peter Godolphin. Lionel still double-crosses his brother and sells him into slavery. Oliver still ends up becoming a Barbary pirate chief. Character interactions and motivations are all made clear to us.

Even the plots and counterplots involving Oliver, Asad-ed-Din and Fenzileh are also still there, though one disappointment for anyone familiar with the novel is Fenzileh's reduced presence in the film. She is awesomely villainous in prose, so its too bad she only gets a minute or two of screen time. 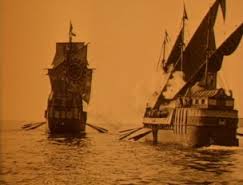 But the story as a whole is unharmed by the transition to a new medium--still exciting; still suspenseful. The Sea Hawk is a true epic of a swashbuckler.

Wallace Beery is the sea captain who is hired to kidnap Sir Oliver and who is later forced by circumstances to work for him. Beery was an enormously entertaining actor and he's obviously having fun in his role--perhaps making his character even more memorable than he was in the book.

Enid Bennett (who played Maid Marian in Fairbanks' Robin Hood two years before) is also very good as Rosamund Godolphin. And, by golly, she is pretty enough to make us believe that at least three different male characters want her. What is it about the 1920s that produced such a unique form of classy female prettiness that seems to have since faded away forever? 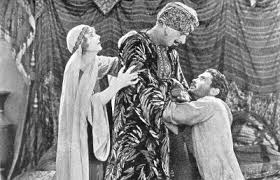 The film looks great. I'm all for modern CGI in films like the Avengers, which couldn't exist without CGI. But watching real ships crewed by hundreds of real actors and extras will always have its own unique appeal. In fact, the ship combat scenes were so good that some of the footage was used again in 1935's Captain Blood.

16 years after this film was made, with the silents long gone, Warner Brothers would remake The Sea Hawk with Errol Flynn in the starring role. Well, they would sort of remake it. It would have the same title and still be a swashbuckler set during the Elizabethan era. But otherwise, it would be an original story. All the same, we'll take a look at it next week.