Dinosaur on a Submarine! 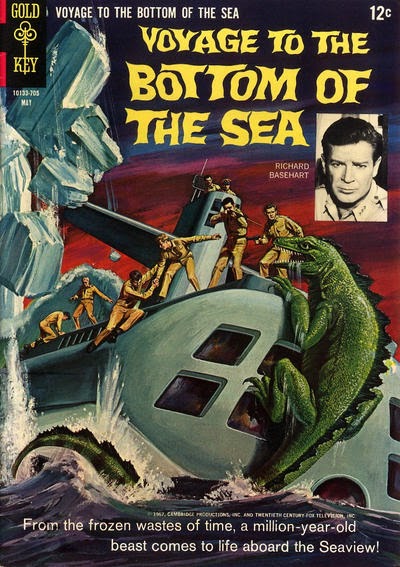 During its career on both TV and comic books, the submarine Seaview ran into a lot of weird stuff. In fact, I'm pretty sure there were at least two TV episodes that involved a Lost World on which dinosaurs still lived.

So, when the Seaview runs across a prehistoric creature in Gold Key's Voyage to the Bottom of the Sea #8, it's really not considered particularly notable by the crew. In fact, I'm a little surprised that Admiral Nelson doesn't sigh and mutter "What, another one?" in a resigned voice.

What makes this particular dinosaur encounter interesting is that it's just one part of a larger story. Weird stuff aboard the Seaview is so usual, that a rampaging carnosaur isn't enough by itself to form a complete story.

Nelson and his crew have taken aboard a trio of scientists and begun an exploration voyage under the arctic ice to the North Pole. What they don't know is that this means they will stumble across a secret weapon cache being maintained by a hostile nation. The cache is stockpile of bombs that causes anyone caught in its area of effect to enter a state of suspended animation, unless they've received an inoculation before hand. 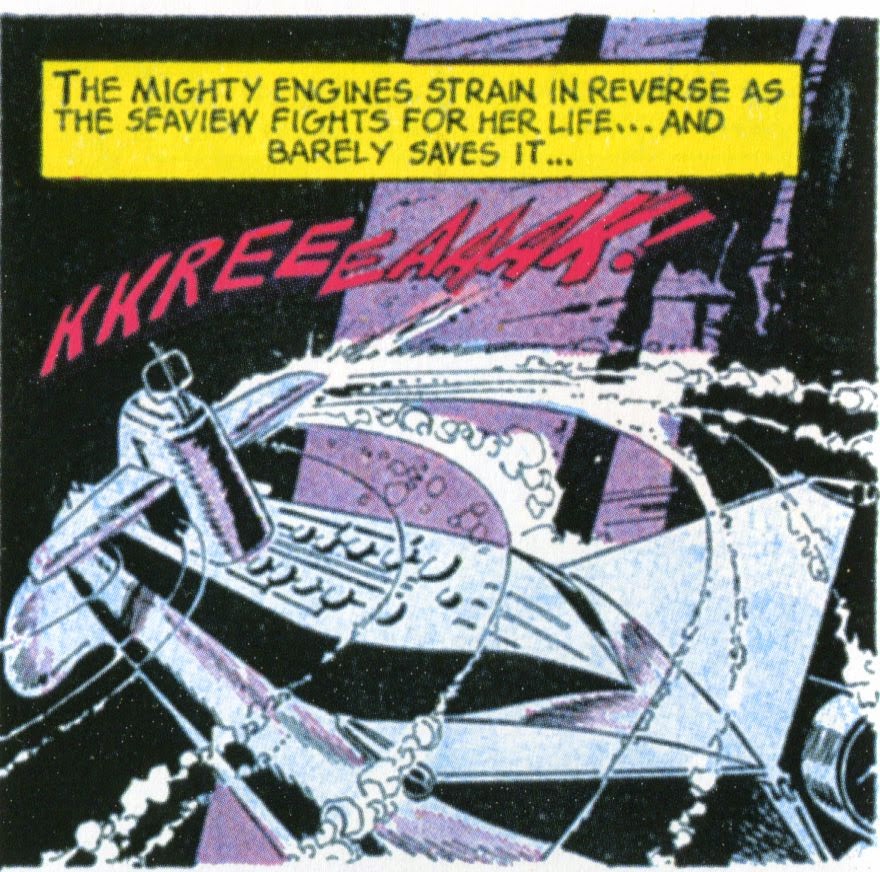 One of the scientists is a double agent tasked with destroying the Seaview before the bombs are discovered. His first attempt involves sabotaging the helm controls.

Soon after this, the sub finds and recovers a dinosaur frozen in an iceberg. They bring it aboard for further study after their mission is completed.

This is further evidence that the crew of the Seaview is pretty jaded. They find a living dinosaur in suspended animation and pretty much just stick it in a closet until they find the time to deal with it.


The double agent sees a golden opportunity and thaws out the dinosaur. It precedes to rampage through the ship until Nelson manages to dump it out an airlock. 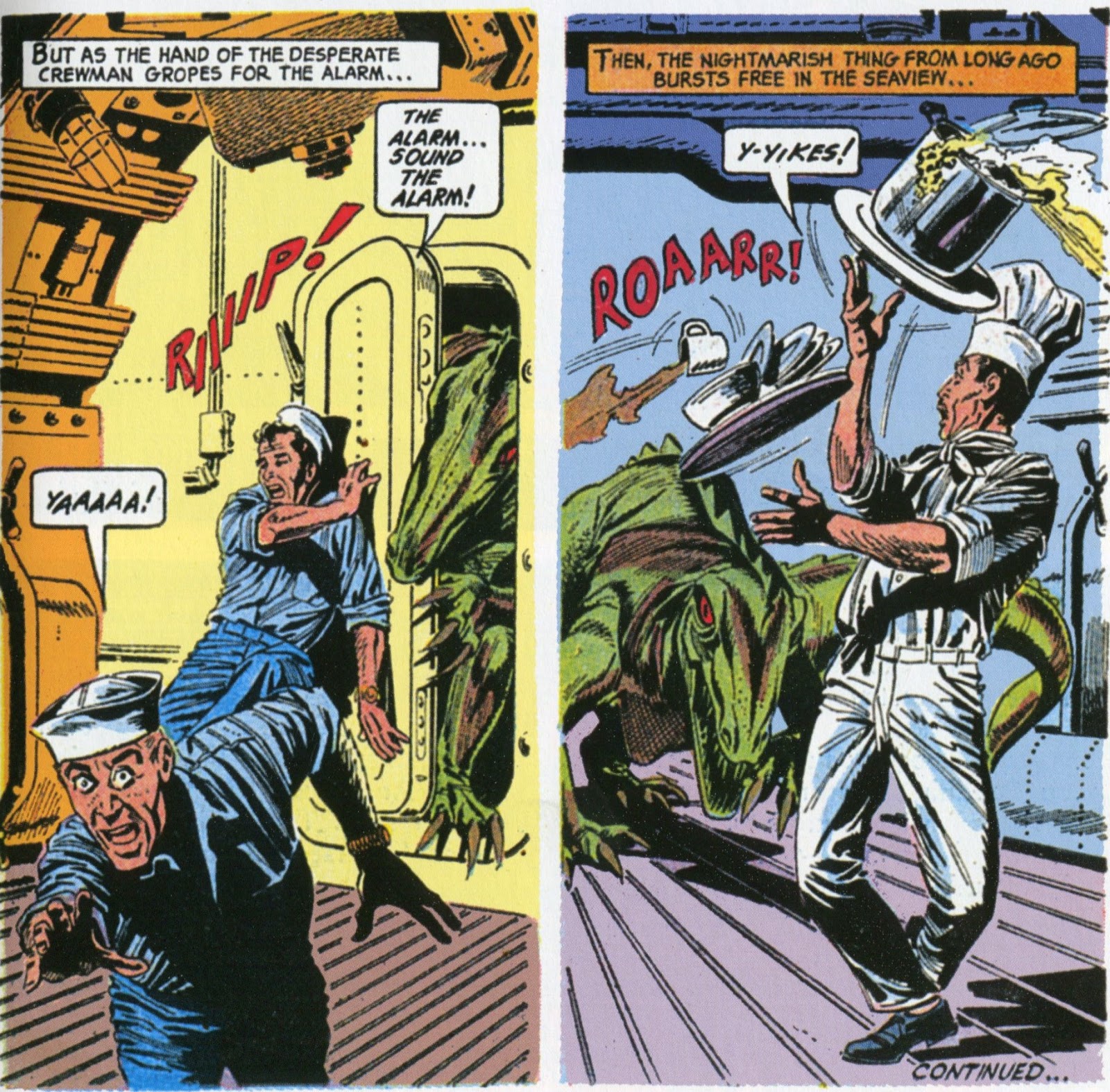 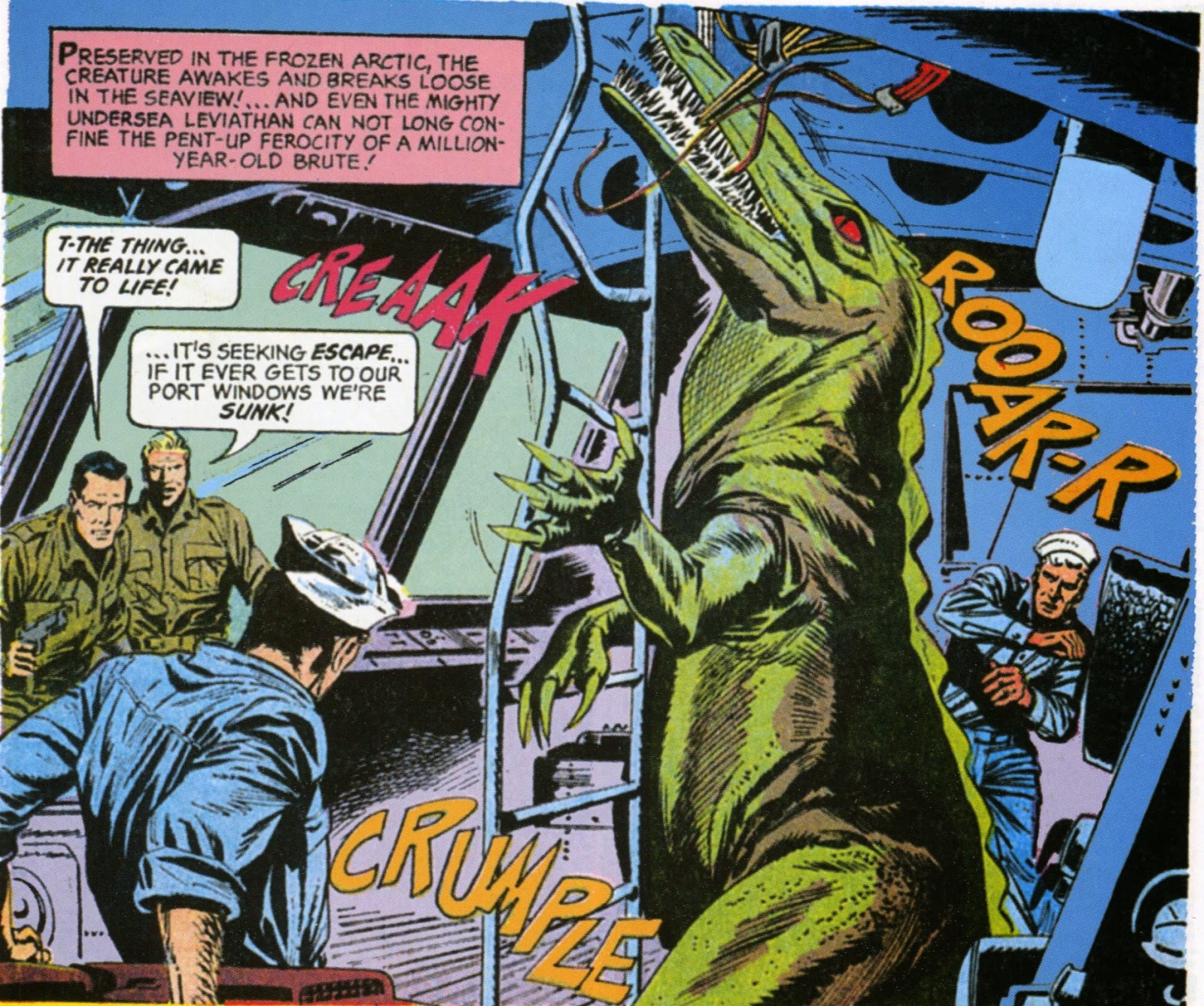 The Seaview eventually nears the North Pole and surfaces through a crack in the ice. Since the
weapons cache is nearby, the spy simply uses one of the bombs to "freeze" the sub's crew. Fortunately, Nelson and a few others are underwater in deep sea diving suits, shielded from the blast. This gives him a chance to turn the tide on the villains, save the crew and recover the remaining bombs.

I was making fun earlier of how casual this story is in introducing a dinosaur into the story as just one small plot element. But actually, I love this. The original TV series lost some of the dramatic edge it originally had as the plots grew more and more bizarre, but the comic book was able to be just as bizarre and make it work. A combination of good writing and Alberto Giolitti's wonderful art work glued the bizarre elements together into entertaining and imaginative stories. Gold Key's Voyage to the Bottom of the Sea comic book provides us with a constant reminder that pretty much the only reason the Seaview existed is to stumble across weird stuff on a regular basis.

Email ThisBlogThis!Share to TwitterShare to FacebookShare to Pinterest
Labels: Gold Key, Voyage to the Bottom of the Sea