Rafael Sabatini was good at action scenes. For example, the final battle in his novel Captain Blood is so good you pretty much have to jump back and read it a second time as soon as you're done.

But Sabatini was also good at plot construction and dialogue. Boy, was he ever good at dialogue. In fact, he was a master at using dialogue to build up suspense and generate a palpable sense of danger. 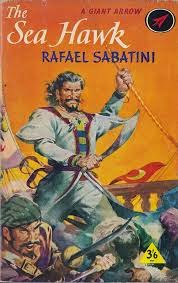 His 1915 novel The Sea Hawk is perhaps the best example of this. The protagonist is Sir Oliver Tressilian, a former privateer who (around 1590 or so) is living on his Cornwall estate and is kept busy wooing Rosamund Godolphin. But Rosamund's annoying brother Peter objects to this and is causing trouble.

When Sir Oliver's half-brother Lionel kills Peter, Sir Oliver is blamed for the crime. This doesn't help his wooing prospects with Rosamund, who fully believes Oliver killed her brother. Oliver refuses to narc out his brother, so he can't prove his own innocence.

Lionel doesn't trust Oliver to remain quiet forever and arranges a kidnapping. And so Oliver ends up as a galley slave on a Spanish ship. When that ship is captured by Barbary pirates, the embittered man switches sides. Five years later, Oliver is now known as Sakr-el-Bahr ("The Hawk of the Sea) and is the most feared of the Barbary pirates. Circumstances give him a chance to capture both Lionel and Rosamund.

Up to now, the novel has been great--Sabatini's prose is "just a little bit flowery, giving it a rhythm that seems appropriate to the subject matter and forming passages that often beg to be read aloud." (quoted from my book Storytelling the in Pulps, Comics and Radio) 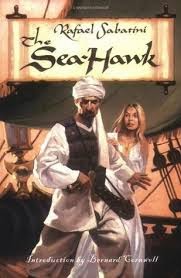 But it is at this point that The Sea Hawk becomes impossible to put down. Oliver's current boss is Asad-ed-Din, the Basha of Algiers. He falls for Rosamund himself and wants to add her to his harem. But Oliver, in the meantime, is beginning to appreciate just how much of a villain he's become and now wants to get Rosamund to safety. On top of this, Asad's favorite wife--a Sicilian woman named Fenzilah--and her son Marzak are also plotting against Oliver. It's only his success as a pirate, which has brought a lot of wealth and slaves to Algiers, that keeps Oliver's head on his shoulders.

So he has to plot and counter-plot, trying to keep on Asad's good side while keeping Rosamund safe and fending off the efforts of Fenzilah to discredit him. All this takes up the bulk of the second half of the book. There's very little action--most of this is driven by dialogue and Sabatini's wonderful prose.

It's notable that no action is needed. The fluid and dangerous situation plus the sharp dialogue is enough to generate all the tension the story needs to keep you on the edge of your seat. It really does beg to be read aloud.

Also, Oliver's character arc is fascinating. His pirate activities are not romanticized or justified in any way--he really does become a bad guy for a time. But we understand the circumstances that drove him to this and we find ourselves rooting for him when he finally decides to redeem himself.

The final few chapters might stretch themselves just a bit too far to tie up all the plot threads a little too neatly, but that's a minor criticism. Sabatini's best ever book is Captain Blood, but The Sea Hawk is near the top of the list as well.

About a year ago, I wrote a post about Sabatini's novel The Black Swan, then followed that up a week later with a post about the movie adaptation. I promised to do the same with The Sea Hawk within "the next few months." Well, I'm finally getting around to that. Next week, we'll look at the 1924 silent movie adaptation. In two weeks, we'll examine the 1940 Errol Flynn version. So we'll be buckling our swashes for a little while yet.

You can read The Sea Hawk online HERE.